Kayaking in Golden, BC 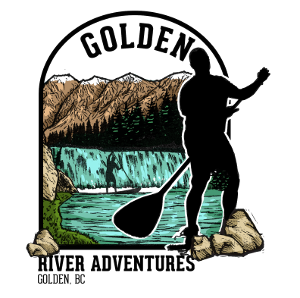 History of Kayaking in British Columbia

A kayak is small, human-powered boat primarily designed to be manually propelled by means of a double bladed paddle. The traditional kayak has a covered deck and one or more cockpits, each seating one paddler. Their cockpit is sometimes covered by a spray deck prevents the entry of water from waves or spray and makes it possible for suitably skilled kayakers, to roll the kayak: that is, to capsize and right it without it filling with water or ejecting the paddler.

The first kayak was created by the Inuit, an Arctic people. These early kayaks were made out of wood and covered in sealskin which was waterproof. The materials that have been used to make a kayak have changed significantly with the years. Many early kayaks used wooden frames covered in skin for their materials. However, with the ship’s adoption by European settlers, they were covered in fabric. This method continued until the 1950’s when fiberglass was introduced, and then in 1984, the first plastic kayak was made. At present, kayaks are sturdy, light, and very versatile 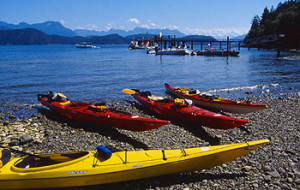 Kayaking in desolation sound, BC

In British Columbia, the origins of kayaking can be traced back to the rugged West Coast, where kayaks were used for fishing and hunting by the aboriginal people. More recently, kayaking in British Columbia is now used primarily as a recreational tour. Popular coastal kayaking locations in British Columbia include Desolation Sound, the Broken Group Islands and the Sunshine coast. Coves, inlets and sounds provide ideal waters for the novice kayaker to explore British Columbia sea life. Additionally, freshwater kayaking on inland lakes and rivers is also quite a popular activity in British Columbia. 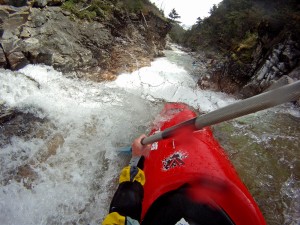